Shortness of breath: a sign of low body O2

Difficulty breathing, also known as dyspnea or shortness of breath is a symptom in which a patient suffers from breathing problems. The condition is accompanied with an awareness of one’s own breathing (because it is too heavy) and gives you an unpleasant experience, especially with chest pain. 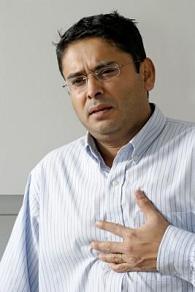 It is a subjective symptom that does not have a strict medical definition. In fact, since the same symptom hides under different names, it is a label that is used to hide the real nature and cause.

This breathing problem commonly occurs in people with cystic fibrosis, progressive heart disease, HIV-AIDS, asthma, cancer, COPD, pregnancy, emphysema and many other conditions. The other common triggers for shortness of breath include exertion, anxiety, at night, and after eating or meals.

Patients experiencing other health condition symptoms like diabetes may also exhibit the same characteristics of breathing problems like excessively heavy breathing during rest. A lack of CO2 in your lungs, known as alveolar hypocapnia or hyperventilation is the common cause for shortness of breath. Generally, a normal breathing pattern while at rest is unnoticeable, noiseless and imperceptible to others. The pattern has a small tidal volume of about 500ml for an average person weighing 70kg, slow with an average of 12 breaths per minute, light with an average ventilation of 6L per minute. The normal breathing strictly takes place through nose and is diaphragmatic in nature.

Some of the other health conditions like airway constrictions caused by alveolar hypocapnia, chest breathing caused by spasmodic diaphragm, blockage in airways caused by mucus and prolonged inflammation due to a possible increase in blood viscosity could dramatically increase breathing problems and worsen shortness of breath.

When a patients resorts to mouth breathing, the condition worsens further due to a drastic reduction in nitric oxide absorption as well as reduction of CO2 levels in lungs.

The condition of hyperventilation is a forerunner for alveolar hypocapnia; this disrupts normal oxygen delivery to lungs because of:

Note that such people suffer from low CO2 in respiratory tract and low O2 in their cells. The proportion of CO2 in arterial blood can be high in people who suffer from alveolar complications. Overeating (taking too heavy meals), stress, anxiety, deep breathing exercises, night sleep, exertion and poor postures lead to hyperventilation and eventually alveolar hypocapnia are the triggers that cause shortness of breath and often chest pain.