What is the cause of nasal congestion?

Also known as a ‘stuffy nose’, nasal congestion is known to occur only in people who have low 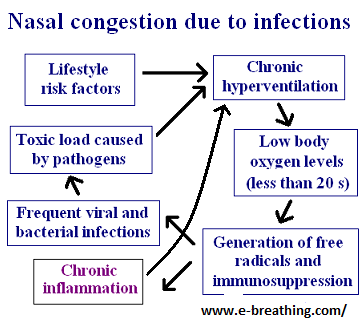 body-oxygen levels – people who have less than 20 seconds for the body-oxygen test. Chronic hyperventilation, upper chest breathing and habitual mouth breathing all have the potential to trigger tissue hypoxia.

Although the main superficial causes of nasal congestion are inclusive of viral and bacterial infections, low body-oxygen content on a cellular level is believed to be the major factor that suppresses the immune system, and generates conditions for bacterial infections as well as allergies, mucus and cold or infections. However, overbreathing can cause nasal congestion even without any sputum or mucus produced. 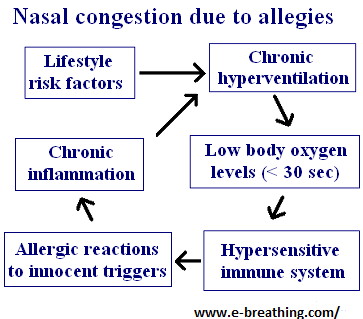 Experts believe that a stuffy nose, or nasal congestion can additionally be triggered due to allergies to certain airborne substances, such as hay fever. However, even in this case, chronic overbreathing is responsible for the hypersensitive state of the immune system. On the whole, the cause of nasal congestion is the same, as you can see in the diagram.

If truth be told, more than 90% of people who suffer from nasal congestion can acquire relief in under 2 minutes. For this, they just need to slow down their heavy breathing with the help of a simple breathing exercise. This extremely easy and simple respiratory exercise to clear a stuffy nose was initially invented by Soviet MDs who practiced the Buteyko method. Later, this most natural remedy to get rid of nasal congestion was taught by more than 180 MDs to thousands of their patients, all of whom suffered from hay fever, asthma, chronic mouth breathing, sinusitis, rhinitis and a number of other conditions. The best part is that this treatment can also be used by pregnant women, children and people who have allergies or symptoms of fatigue. Moreover, you can apply this exercise before night-time sleep too. Here is the link that will help you learn about the breathing exercise “How to get rid of a stuffy nose” in less than 2 minutes. Given below is a YouTube video also ‘How to get rid of a stuffy nose‘ that will help you as well:

On the whole, if you manage to slow down your automatic breathing, or bring it closer to the medical norm, and achieve more than 20 seconds for the body-oxygen test, then your frequent respiratory infections are sure to disappear. However, if you need to get rid of hay fever, then you have to achieve over 30 s for the body-oxygen test, and avoid all triggers for desensitization of the immune system.